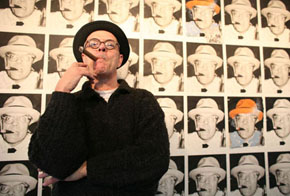 Paintings generally begin with three dimensional collage making. A variety of materials are bound to the underlying wood panel with neutral PH polyvinyl paste, stainless steel screws and staples. The paintings are objects as well as depictions.

In the Kyoto studio prints are made on a variety of papers including antique Japanese book pages and papers I import from Nepal, Thailand and the Philippines. These papers are combined in what is known as chine-collé at different stages of the printing process. Carving wood blocks and printing is done by myself and my assistants using water based pigments. On top of this I sometimes add lithography in professional print studios in Japan and the U.S.A.. I believe I have created the largest wood block prints ever made in Japan.